Chris was fortunate to have traveled the world, and he wanted to support others in crisis. With this in mind, The Chris Mikesell Foundation donated $3,000 to assist in humanitarian aid efforts relative to the Syrian Children Refugee Crisis. 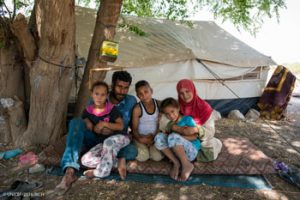 A Syrian refugee family in the Jordan Valley, Jordan, where they have lived in a tent for four years. From left to right Na’ama, 8, Hussein, 31, Khalif, 10, Farah, 6, and their mother Asia 27. The family fled their home in Hama when the war reached their community. “We saw people getting shot, and we lost cousins and uncles. That’s why we left,” said Asia, 27.  Photo courtesy UNICEF

According to UNICEF, the Syrian refugee crisis remains the largest humanitarian crisis since the end of World War II. Countries neighbouring the Syrian Arabic Republic are hosting more than 4.8 million registered Syrian refugees, including more than 2.2 million children. Depleted resources, the high cost of living and restricted livelihood opportunities due to lack of access to employment and legal residency are making it difficult for vulnerable families to meet their own and their children’s basic needs. Too many Syrian refugee families are forced to resort to negative coping practices, which often lead to early marriage and child labour. Syrian refugees, including unaccompanied and separated children who lack legal documentation, are also in constant fear of being exposed and therefore are vulnerable to exploitation such as working in low-paying and dangerous jobs. The overall situation is exacerbated by weak economic growth in host countries, overstretched resources and services that are struggling to meet the additional needs of affected local communities.

In 2016, UNICEF’s response continued to support government and partner efforts to deliver essential services in refugee camps and host communities.

In the Foundation’s history, more than $33,000 has been donated to humanitarian efforts led by UNICEF.