During Chris’ life, he had the great opportunity to travel across the globe. When he saw people in need, he wanted to help. With this in mind, The Chris Mikesell Foundation continues to support UNICEF’s humanitarian aid efforts with a $15,000 donation in 2017. Of that, a grant of $5,000 was given to support relief efforts related to the crisis in Syria. 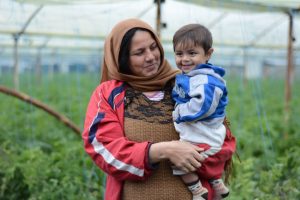 Issa, is one of more than 2,700 children in Syria treated for Severe Acute Malnutrition with support from UNICEF last year. More than 1.8 million children and mothers were also screened for acute malnutrition across the country. Read Issa’s full story.

UNICEF reports that Syrians are facing the largest humanitarian crisis in the world, a conflict that has been ongoing for more than six years. Grave protection and human rights violations are occurring daily.

Unfortunately, children are paying the heaviest price in the conflict, and their suffering continues to grow as the violence escalates. Nearly 6 million children are in need of humanitarian assistance, compared to 500,000 in 2012.

At least 652 children were killed in 2016 – a 20 percent increase from 2015  – making it the worst year for Syria’s children since child casualties have been formally documented.

Children are also being used to fight directly on the front lines and increasingly in combat roles as executioners, suicide bombers or prison guards. According to UNICEF, the number of children recruited into combat doubled in 2016. Beyond the bombs, bullets and explosions, children are dying in silence from preventable diseases.

“The depth of suffering is unprecedented,” UNICEF Regional Director for the Middle East and North Africa Geert Cappelaere said. “Millions of children in Syria come under attack on a daily basis, their lives turned upside down. Each and every child is scarred for life with horrific consequences on their health, well-being and future.”

While devastated by the injustice in this region, The Foundation is proud to join UNICEF and its partners to deliver essential services for Syrian families. Critical efforts are being made to minimize the impact of the crisis on children – including in the life-saving areas of health, nutrition, immunization, water and sanitation, as well as education and child protection.

Neighboring countries are also receiving support for Syrian refugee families and the host communities in which they have settled. These critical efforts help defend the rights of children and safeguard their future. Read more about UNICEF’s efforts in Syria and the surrounding countries.

In the Foundation’s history, more than $48,000 has been donated to humanitarian efforts led by UNICEF.