When Chris saw people in need during his worldwide travels, he wanted to help. With this in mind, The Chris Mikesell Foundation continues to support UNICEF’s humanitarian aid efforts with a $15,000 donation in 2017. Of that, a grant of $5,000 was given to support relief efforts related to famine in South Sudan, Somalia, Nigeria and Yemen, and in nine additional countries across Africa and the Middle East. 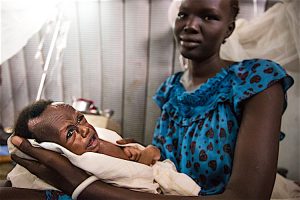 Nyankena holds her baby Both Tebg, a 2-month-old child with severe acute malnutrition, at a clinic run by UNICEF partners in Juba, the capital of South Sudan. ©UNICEF/UN053453/Gonzalez Farran

The famine in that region, along with the crisis in Syria, are UNICEF’s top fundraising priorities. Armed conflict, economic crisis and below-average harvests have contributed to an urgent need and declaration of famine in the region. In South Sudan alone, an estimated six million people, half the country’s population, are severely food insecure. That is the largest number of people ever to experience severe food insecurity in South Sudan.

The Foundation’s grant helps support efforts to screen and treat children suffering from malnutrition, provide health services such as vaccinations, support water, sanitation and hygiene programs to prevent deadly diarrheal diseases, protect children affected by the conflict and displacement, give access to education, and give cash assistance to the most vulnerable families.

As UNICEF Executive Director Anthony Lake explains: “We can still save many lives. The severe malnutrition and looming famine are largely man-made. Our common humanity demands faster action. We must not repeat the tragedy of the 2011 famine in the Horn of Africa.”

While devastated by the suffering in this region, The Foundation is proud to join UNICEF and its partners to deliver essential services for children and families in the region. Read more about UNICEF’s famine relief efforts.

In the Foundation’s history, more than $48,000 has been donated to humanitarian efforts led by UNICEF.